Technology at the World Cup

Having been seized by the general World Cup fever, I though I'd talk about the role technology plays in sporting events like this. Now I want to start off by clarifying that I not usually a sports person, so bear with me. That being said, I love the World Cup. I love being able to live stream it over the internet, which in itself is a fairly recent technology when you think about it. 1.7 million people watched the U.S. vs. Germany game through ESPN's live stream. This is part of a general trend away from cable, in which more and more people are consuming their content solely over the internet.

Different sports have different levels to which they integrate and utilize modern technology. (This was the first year that goal-line technology was employed at the World Cup to help officials, for example). The TV coverage of games is able to replay a goal from various angles, slow down, pause, and otherwise enhance the experience of its viewers. Some sports, like soccer - or to the rest of the world football - prefer to keep instant replay out of the equation, while others use it extensively. This has led to some controversy in the past and again during the Uruguay vs. Italy game, when Uruguayan player Luis Suarez bit Italian Giorgio Chiellini. Since it was not seen by the referee, no action was taken during the game. Many argue that this action changed the outcome of the game.

Italy was already playing with 10 men due to a red card issued to Claudio Marchisio early in the second half. If instant replay existed in soccer, a fourth official would have reviewed the play, seen the evidence, and Suárez would have been removed from the game, leveling the playing field once again. Both teams would have played a much different style at that point, and the game would have more than likely ended in a tie, which would have advanced Italy in favor of Uruguay. [1]

One of the things I find most interesting about this incident is the way it went viral on the internet. Immediately, Twitter blew up. Google, which was already showing near-live updates on scores and rankings, had articles commenting on the bite within a matter of minutes. At the same time, memes starting appearing on the #worldcup Twitter feed. Various brands naturally jumped on board.

I suppose what strikes me in all of this, apart from being amused by how quick and clever the internet can be, is how we manage to engage with events like the World Cup in a meaningful way through the internet and social media. The tweets and memes right after this incident were indicative of all the conversations also taking place in stadiums, bars, offices, and homes around the world. They supplemented those conversations. This headline on CNN really says it all, "World Cup becoming biggest social-media event ever." Are you watching the World Cup? Let me know how and if you're engaging in the social media commentary in the comments below. 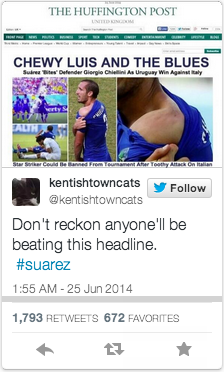